Visitors to this blog must now be familiar with my random appearances and frequent absences. This irregularity irks me no end but I take some solace in that I’m even more callous with my Rambling On My Mind blog. That I enjoy writing – and reading – that one considerably more than DyingNote but still write so infrequently gives you an indication of the strangeness of my mind…or perhaps my innate laziness. Yet during all the weeks that I post not a single line, people still drop by. I’m in equal parts mystified and gratified by that. Whatever your reasons might be, it makes me want to stay with this. That, and something else. I don’t miss writing on this blog as much as I miss reading what my friends – albeit virtual – post on theirs. My old favourites Rick keeping it going despite being Surrounded By Imbeciles, John penning his Thoughts From West Five, the prodigious trio of Wes, Todd and Austin pouring out their love for music at Little By Listen and the many blogs that I later happily stumbled upon keep me informed, entertained and …er… shamed. While I’ve been away on my latest break from here, I see that I Made You A Mixtape and Notes On Notes are back. Excellent.

So what have I been up to? Quite a bit of traveling. It started with a vacation to spectacular Ladakh up in the very north of India – something that my wife and I had wanted to do for years. 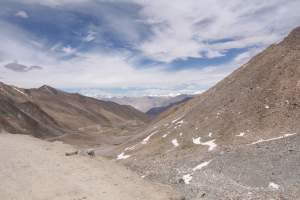 And then I was off to Pondicherry in the south as part of the sound crew for a college festival. Heavy lifting, crazy hours, mad shows, the inevitable (but always avoidable, in retrospect) screw-ups and always an education. Wild week.

Ah! that bit about the sound crew, yes? I’m formally ‘mucking’ about with the world of sound these days. I spend some time behind the console adding truly terrible decorative ‘value’ – and in that duration learn a bit about live sound mixing and the infinite patience of my fellow humans – to the work of Naveen, the live sound engineer for the very popular indie band Lagori and float in and out of a remarkable sound studio and school, Audio Academy. I doubt I’ll make a career out of being a sound technician – live or studio – but I’m enjoying learning more about something I’ve loved for so long: music. And yes, I have some ideas in that area that I hope I will get around to turning into something of substance. I was off a few days later to Mumbai in the west to my favourite gig – Control ALT Delete. I’ve supported this fantastic effort of 3 exceptional individuals – Himanshu, Rishu and Nikhil – to bring Indie Indian bands to the fore since last year. Till last year which saw the 4th edition, it was an annual event. This year they stretched themselves by adding a metal edition earlier in the year and it looks like going forward, we will have a metal edition and an ‘unmetal’ edition. This is a no-corporate-sponsor, crowd funded, pay-what-you-want event where any losses are covered by the trio. The bands get paid an equal share of any excess left over after costs and only if. And they happily play fully knowing that. The gig has a gracious host in Blue Frog which has supported Indie music here since its birth. You might think that with these monetary ‘constraints’, you’d have a cheaply produced show. Far from it. This was the best multi-band gig that I’ve been at. The place was packed (took some time but it filled up soon enough), the bands were fantastic, the changeovers were smooth and fast, the sound was good and a great time was had by all. I’m heading there next year as a volunteer for sure.

What’s next? I’ll be traveling again the next 4 days. But I’ll be back sooner than you think 🙂