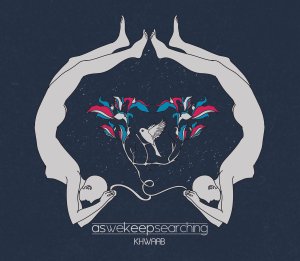 The last few months have been a dream lived by post-rock band Aswekeepsearching. Multiple gigs and a tour playing live polished their sound, brought alive many of their musical ideas, finally culminated in the band’s first full length album released this month backed by its first international outing – a five-stop tour of Russia. It took a lot of hard work, commitment and quite some imagination to do all of this, and that in such a short time. All of this is in ample evidence on the album ‘Khwaab’ (which not surprisingly translates to ‘Dream’).

Even though lyrics grace 6 of the 11 songs in this set, the music is largely instrumental in keeping with what one hears of post-rock mostly. As with their earlier EP, the human voice continues to be employed to add textural heft. Yet, the vocals stand out a bit more here and the overall effect is of a richer quality. I think that’s best heard on “What If_?”. Personally, I find the few lyrics quite depressive – valid for our times perhaps but I’d rather ignore them (that’s just me though). But that’s easily offset by the shimmering beauty of the compositions. Listening to these pieces sometimes makes you feel like they’re a film soundtrack, one filled with a heart-wrenching poignancy. It’s hard for a mostly instrumental album to retain interest right through but ‘Khwaab’ manages to do just that with its pensive moments breaking open every once in a while to reveal metal teeth in short, surprising snarls. Well-crafted and excellently produced. This is an album that is one of the finest releases that I’ve heard this year. Although it’s loaded with great numbers, I would go out on a limb and list “B-303”, “What If_?” and “Catalogues” as my favourites…but only just.

Having used so many words here, I really think they do not quite give a sense of the music. So just listen…and again. As for me, I only hope the band hasn’t yet found all that it’s looking for because I would love this dream to linger longer.

You can buy the album from the links on the band’s store page and listen or buy (International) on Bandcamp (below).

Music addict, devoted servant to our cats. Almost all that I do by way of 'work' is to allow me to indulge in writing, music, running, cycling...mostly View all posts by Bantering Ram

I Chase These Notes